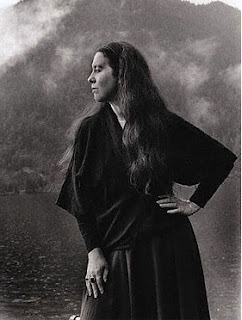 "Part of being a great poet is having great pictures of yourself taken," Tess Gallagher told our class back in '87; and I admit to being fascinated by author photos, especially studio or "studied" photos such as these here. Such photos alone express the high drama and confidence involved in the work of writing -- never otherwise visible. Probably for the drama of it, authors are traditionally photographed only in black & white. True, I've seen some super-dramatic, off-putting, plunge-neckline jacket photos, but most writers have more taste than that.

Here's Tess (photographed in Washington State by Corbin) in 1987, about age 44, when I knew her; the picture is on her book Amplitude: New and Selected Poems. And here's Vladimir Mayakovsky as a 20-year-old art student in 1913, the year he published his collection "I" and blew some windows out of the Moscow literary establishment. I like how Mayakovsky defined himself in a poem: "I'm not a man; I'm a cloud in trousers!"

rankovic “Journalism is printing what someone else does not want printed. Everything else is public relations.” - George Orwell
May 09 • reply • retweet • favorite

rankovic @ShaunLKelly1955 Thank you, Shaun, for the interview and photos. I posted them yesterday on https://t.co/0O1RnYBrJN… https://t.co/VgLz2VajOK
May 05 • reply • retweet • favorite